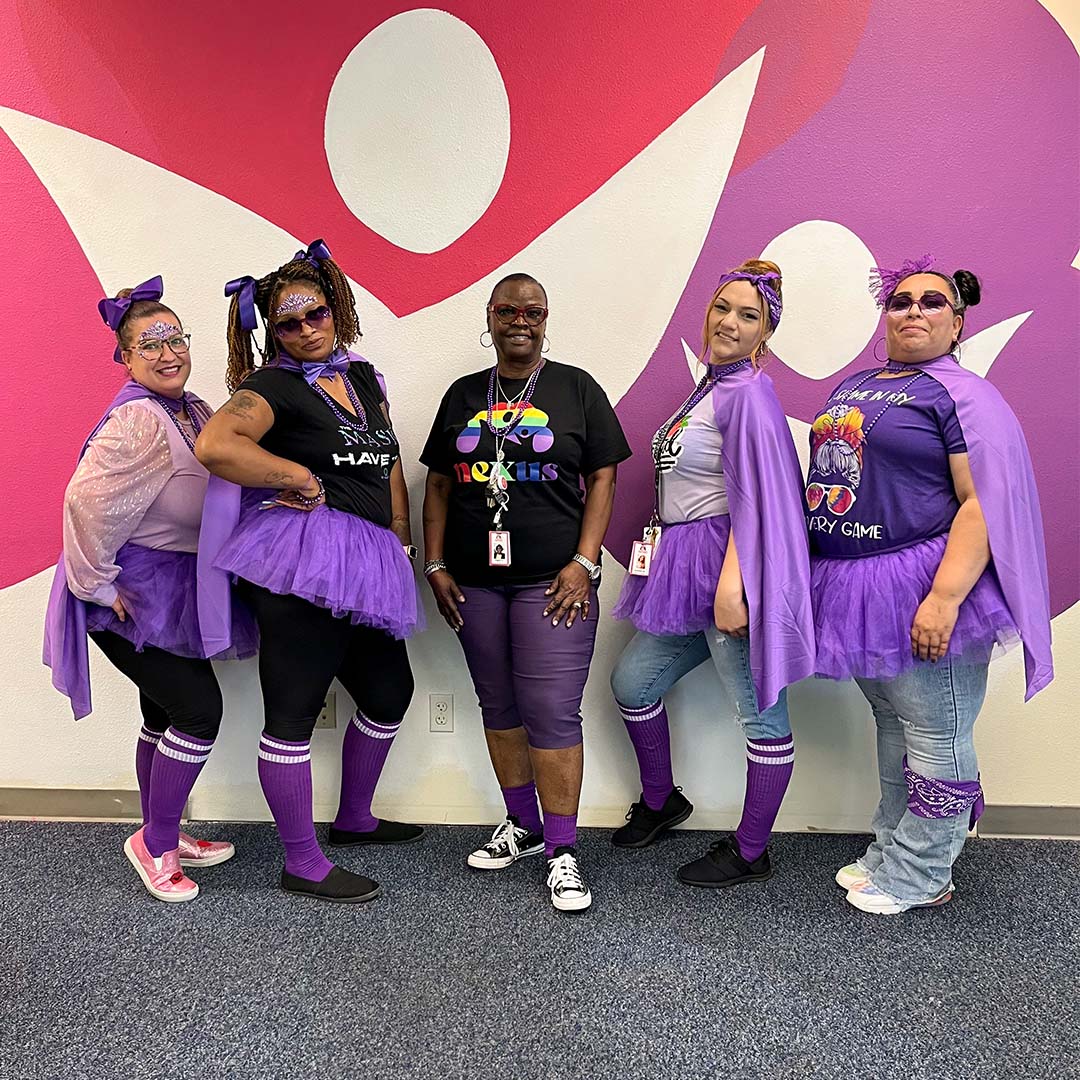 It’s a busy time at Nexus Recovery Center. All throughout September, we are celebrating National Recovery Month with our staff, clients, alumni, and their families, with events both on and off the Nexus campus. This month, we are also celebrating the success of our Pathways to Possibilities Luncheon, which raised $425,000 for Nexus. We are also participating in North Texas Giving Day, the largest giving event in the country. Then, looking forward to October, we are proud to be the beneficiary of Attorneys Serving the Community’s “ASC Goes Couture” fashion show at Neiman Marcus in Downtown Dallas. Please see below for more details of everything going on at Nexus!

Excitement filled the room as Nexus supporters gathered at the inaugural Pathways to Possibilities Luncheon at Dallas College Eastfield Campus. More than 100 attendees came out on a rainy morning to support our mission through sustainable donations. Altogether, they raised $425,000 to ensure that women with substance use disorder can receive needed services to rebuild their lives and heal alongside their families.

The luncheon started off with a video welcome from the children at the Nexus Child Development Center, after which CEO Heather E. Ormand told attendees about Nexus’ mission to serve as a community of hope and sobriety for all women and their families who strive to live healthy, resilient lives. Then, after debuting a new mission video, Heather brought Nexus alumna Stephanie Chaparos to the stage to share her story.

A 26-year-old mother of two, Stephanie has been in recovery since February 28, 2021. She talked about her struggles with multiple drug addictions, and how she lost custody of her firstborn as she struggled with substance use disorder. She came to Nexus while pregnant with her second child, and gave birth during her treatment. Her son was born healthy, and because Stephanie was a client at Nexus, she was able to keep custody of him. A year and a half later, Stephanie has a job and a car, and is actively working to reestablish relations with her mother and firstborn son.

Stephanie received a standing ovation upon finishing her story, after which Nexus Board Member Kristy Faus came up to the podium. She told attendees that while the past two years have been challenging, Nexus has not had to close for a single day during the pandemic. Kristy thanked Nexus’ donors for making this possible, and announced the Founders Circle of the Pathways to Possibilities Giving Society. These donors, who made a commitment of support to Nexus prior to the luncheon, have together donated more than $350,000 to Nexus Recovery Center.

At the end of the luncheon, Heather Ormand came back up to the podium to invite everyone in attendance to take a tour of Nexus’ campus. By this time, the rain had stopped, and around two dozen attendees came over from Eastfield to view Nexus’ facilities on La Prada Drive. Nexus staff were available to answer questions about the program and reiterate their commitment to the women who come to Nexus to seek recovery for both themselves and their families.

Nexus Recovery Center is proud to be the 2023 Beneficiary for Attorneys Serving the Community (ASC), a dynamic volunteer organization of almost 400 women lawyers and law students from the Dallas/Fort Worth area. Join ASC for their annual fashion show and networking event, ASC Goes Couture, on Thursday, October 6 at Neiman Marcus. You’ll be supporting Nexus by going couture with a full Neiman Marcus fashion show!

September is National Recovery Month, and Nexus brings awareness to the substance use disorder landscape and urges the community to join us in helping women and families across the region break down barriers to recovery. This year, Nexus hits the ground running, with events both on and off campus throughout September, including a picnic, carnival, talent show, and more!

We kicked off the awareness efforts with Purple Out Nexus on September 2. Each department on campus received a box of purple ribbons, balloons and strings to decorate their office space. On September 9, Nexus is hosting the Nexus Alumni President and five Alumni to share their stories of recovery journeys. And just a few days later on September 16, the campus will host its first-ever “Recovery’s Got Talent” talent show. Staff and clients are encouraged to participate.

In the true spirit of Nexus’ DNA, a family-focused event will take place called the “Recovery Carnival” on September 23 and include live music, face painting, and all the nostalgic memories and moments wrapped up in carnival fun. And perhaps the biggest, most celebrated event in honor of National Recovery Month is Nexus’ White Rock Lake Annual Family Picnic on September 24, encouraging families to come together and celebrate the progress its clients have made during their time on campus.

Hosting a “Palmer’s Pep Rally” for Nexus Recovery Center is Palmer’s Hot Chicken in Lakewood where a portion of the proceeds from the entire day (September 29) will benefit the recovery nonprofit. And to conclude the month of awareness and celebration for recovery is Nexus’ Sober Sip & Doodle on September 30. All of Nexus Recovery Center’s activities for September can be viewed on Nexus’ website.

Early giving has started for North Texas Giving Day – the largest giving event in the country – and we’re proud to a part of the celebration. Between now and September 21, you can make your gift online at Nexus’ NTX Giving Day page! Afterwards, encourage your friends, family, and colleagues to be a Giving Hero like you! Tag Nexus on your favorite social media platform and use the hashtags #NexusStrong and #NTxGivingDay to join in the excitement online!

Once you make a gift to Nexus, don’t forget to save the date for September 22, when you can follow along by checking the NTX Giving Day leaderboards, prizes page, and social media channels for exciting updates and announcements. Thank you for your support of Nexus Recovery Center and being a part of the NTX Giving Day movement!