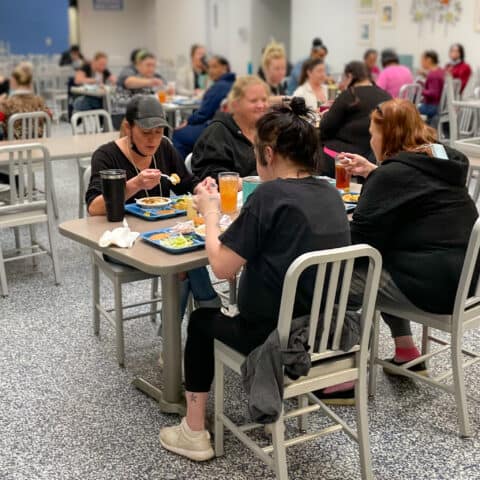 December is a time to reflect over the past year and look ahead towards the new one. In this month’s issue, learn about how Nexus provides food security and nutrition for clients in need, ways you can support women and children at Nexus during our Holidays at Nexus fundraiser and our new Becca Crowell Planned Giving Society.

Rising food costs and food insecurity is a growing issue in our North Texas community. Individuals and families facing food insecurity are impacted not only by the lack of consistent access to food, but also because the food they consume is not substantial or nutritious. Poor nutrition increases the risk of health problems such as obesity, diabetes, high cholesterol, and heart disease. To combat food insecurity, Nexus provides 3 warm, nutritious meals each day plus snacks for the women and children in our care.

Over 90% of the population Nexus serves are low to no income. Women with substance use disorders and their children often arrive at Nexus lacking proper nutrition because they have not been eating enough throughout the day or have been eating foods that are low in necessary nutrients. Food insecurity also effects children. Research shows that food-insecure children are at a higher risk of developmental problems and negative effects on mental health compared to food-secure children. Proper nutrition and hydration are key to the healing process for women and children because they help restore physical and mental health and improve the chances of long-term recovery.

Nexus strives to meet the nutritional needs of women, including those who are pregnant or undergoing detox, as well as their children. Kitchen staff work diligently every day to prepare more than 3,000 meals per week. One of the biggest challenges that Nexus faces has been accommodating different dietary issues, which require kitchen staff to prepare alternate meals. Kitchen Supervisor, Liz Hufford, ensures that the kitchen runs smoothly and complies with safety regulations, orders food and supplies, maintains inventory, and designs the menus for the women and children Nexus serves. She joined Nexus 4 months ago and has worked to streamline processes and redesign menus so that everyone’s nutritional needs are met.

“I love my job here at Nexus because I like helping people through food and I get the chance to do that here,” says Liz. Born and raised in the Dallas area, Liz has a passion for food and has worked in food service her entire life. In addition to her work at Nexus, she also runs an at-home catering business and loves every minute of it. In her free time, she enjoys spending time with her husband of 15 years and her 3 children.

Throughout this holiday season, Nexus will serve hundreds of women, and their accompanying children, who are seeking sobriety on the path to recovery. Many of the families who enter our doors are starting from scratch. Nexus ensures they are supported with the essential items they need, like a warm place to sleep, meals to eat, and clothing to wear as they embark on their recovery journey. You can help women and children by supporting our Holidays at Nexus fundraiser now through December 31st.

The holidays are a time for joy and family bonding, which makes it an especially difficult time for women seeking treatment alongside their children during the holidays. Nexus operates 24 hours a day, year-round, including the holidays to provide treatment services for women and families with substance use disorders. We want our clients to feel as comfortable and supported as possible throughout the holiday season so that they can begin the new year in recovery. Our Holidays at Nexus fundraiser allows women and their children in treatment to enjoy the holidays in a safe and secure place where they can celebrate and heal as a family.

Support Holidays at Nexus by becoming a holiday sponsor, sponsoring a Nexus client or family, or purchasing a holiday ornament. Our holiday ornaments are a meaningful gift and a special way to spread light this holiday season and are available in one of three sizes. Your contribution helps the women and children receiving care have a safe and special holiday and a portion of the proceeds will be used to purchase gifts for women and their families to open during the holidays. Ornaments are available for pick up in person at Nexus on Friday, December 17 from 9:00am-10:00am, 12:00pm-1:00pm, and 5:00pm-6:00pm.

“We are honored to recognize Becca Crowell’s leadership and contributions to Nexus through our inaugural planned giving society,” says Chief Executive Officer, Heather E. Ormand. “She has played such an instrumental role in shaping our agency and so it makes sense to continue her legacy in the years to come.”

Becca joined the staff at Nexus in 1990 as the program director for its newly created Pregnant and Parenting Women with Children program. The following year, Becca became the executive director of the agency, and over the next 29 years helped the agency grow its programs to meet the needs of low-income women and their families, alongside the Nexus board and program staff. Throughout her tenure at Nexus, Becca was also an advocate for substance use disorder treatment and the recovery community. She is a founding member of The Texas Association of Substance Abuse Programs, a statewide trade association, and served as President in 2000 and 2001. She also served as a governmental appointee on the Texas Criminal Justice Advisory Council and on the Specialty Court Advisory Council and was named an AAUW Woman of Distinction in 2008.

Donors who designate a gift towards the Becca Crowell Planned Giving Society will become a part of Nexus’ community of hope for women and families seeking sobriety. Becoming a member is a commitment to the future of Nexus and our mission to help women and their families find their recovery path and rebuild their lives. Donors can join the society by making a legacy gift in a will or trust. Planned gifts can also be made by beneficiary designation through a retirement plan, insurance plan or other assets.